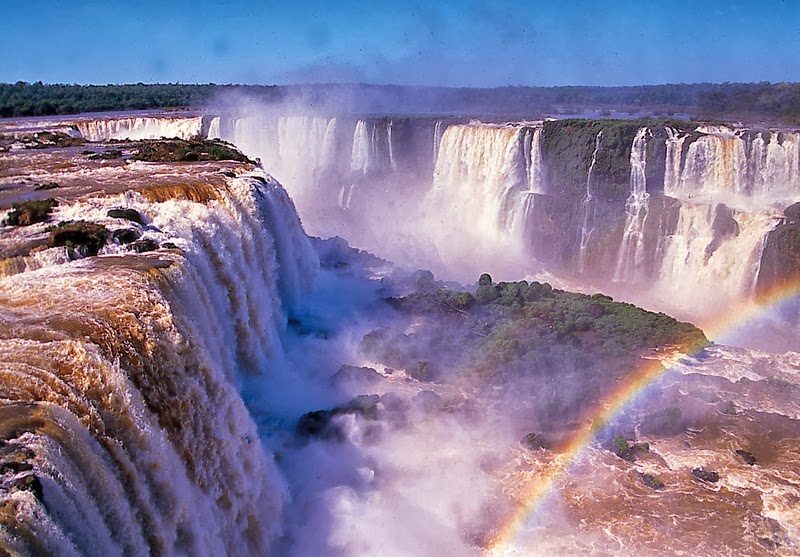 Iguazu Falls, Iguazú Falls, Iguassu Falls or Iguaçu Falls (Portuguese: Cataratas do Iguaçu [kataˈɾatɐz du iɡwaˈsu]; Spanish: Cataratas del Iguazú [kataˈɾatas ðel iɣwaˈsu]; Guarani: Chororo Yguasu [ɕoɾoɾo ɨɣʷasu]) are waterfalls of the Iguazu River on the border of the Brazilian state of Paraná and the Argentinian province of Misiones. The falls divide the river into the upper and lower Iguazu. The Iguazu River rises near the city of Curitiba. The river flows through Brazil for most of its course, although most of the falls are on the Argentine side. Below its confluence with the San Antonio River, the Iguazu River forms the boundary between Argentina and Brazil. 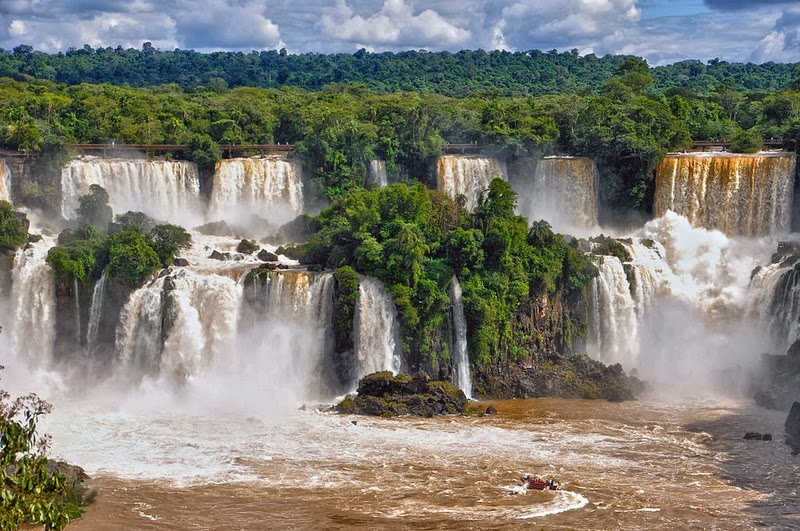 The name "Iguazu" comes from the Guarani or Tupi words "y" , meaning "water", and "ûasú "[waˈsu], meaning "big". Legend has it that a god planned to marry a beautiful woman named Naipí, who fled with her mortal lover Tarobá in a canoe. In rage, the god sliced the river, creating the waterfalls and condemning the lovers to an eternal fall. The first European to find the falls was the Spanish conquistador Álvar Núñez Cabeza de Vaca in 1541. 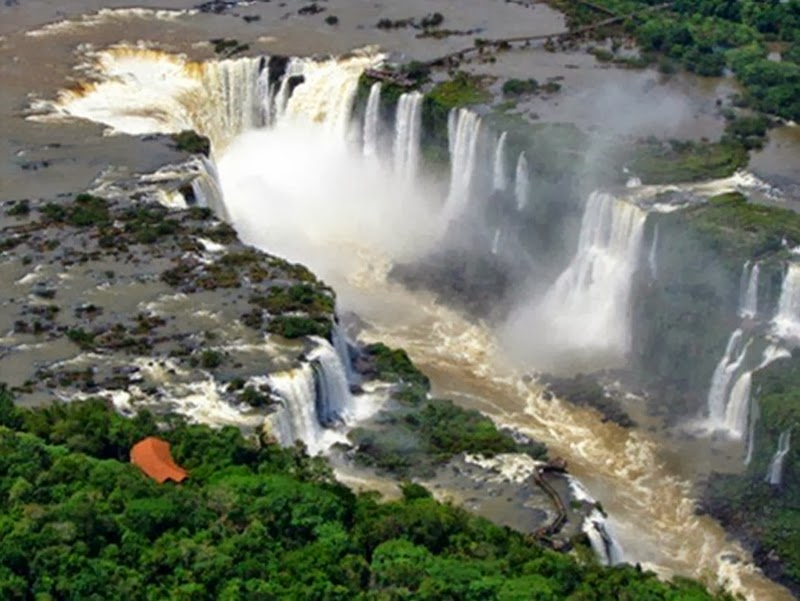 Iguazu Falls is located where the Iguazu River tumbles over the edge of the Paraná Plateau, 23 kilometres (14 mi) upriver from the Iguazu's confluence with the Paraná River. Numerous islands along the 2.7-kilometre-long (1.7 mi) edge divide the falls into numerous separate waterfalls and cataracts, varying between 60 to 82 metres (197 to 269 ft) high. The number of these smaller waterfalls fluctuates from 150 to 300, depending on the water level. About half of the river's flow falls into a long and narrow chasm called the Devil's Throat (Garganta del Diablo in Spanish or Garganta do Diabo in Portuguese). The Devil's Throat is U-shaped, 82 metres high, 150 m wide, and 700 m long (269×490×2,300 ft). Placenames have been given also to many other smaller falls, such as San Martin Falls, Bossetti Falls and many others. 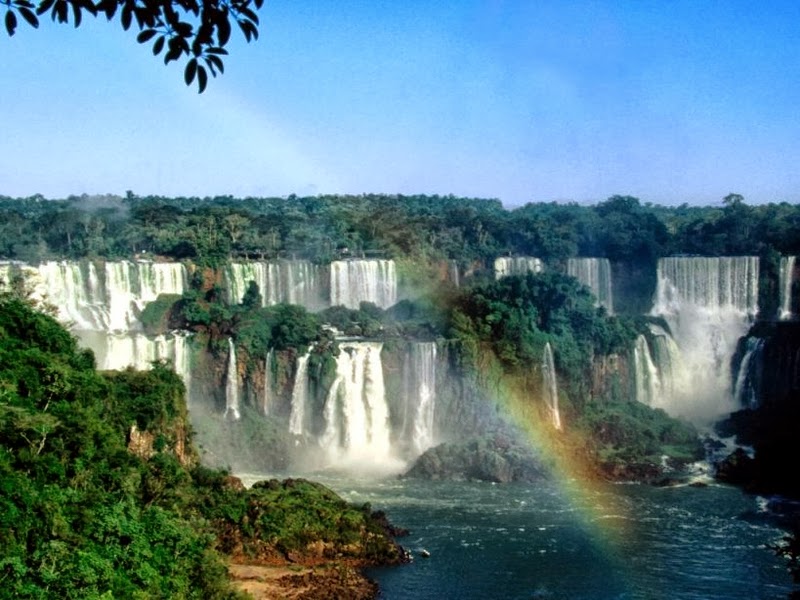 About 900 metres (2,950 ft) of the 2.7-kilometre (1.7 mi) length does not have water flowing over it. The edge of the basalt cap recedes by 3 mm (0.1 in) per year. The water of the lower Iguazu collects in a canyon that drains in the Paraná River, a short distance downstream from the Itaipu Dam. The junction of the water flows marks the border between Brazil, Argentina, and Paraguay. There are points in the cities of Foz do Iguaçu, Brazil, Puerto Iguazú, Argentina, and Ciudad del Este, Paraguay, which have access to the Iguazu River, where the borders of all three nations can be seen, a popular tourist attraction for visitors to the three cities. 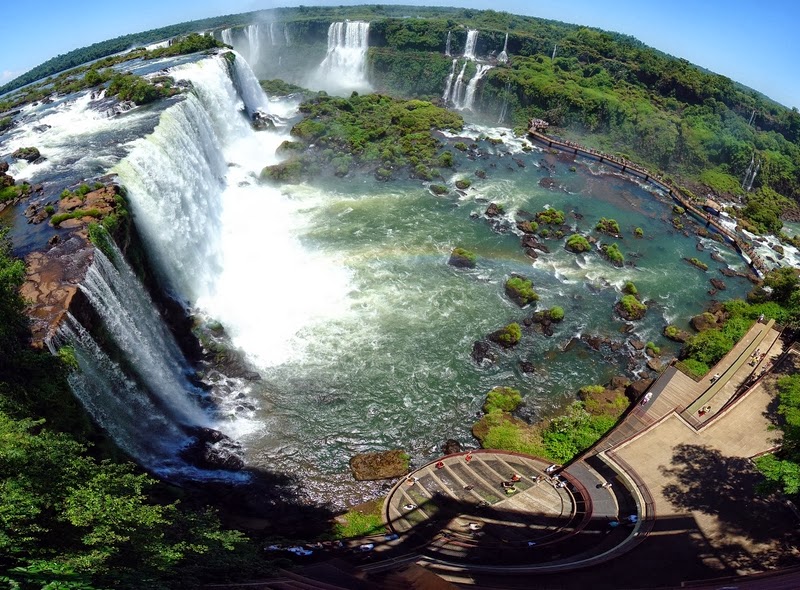 The Iguazu Falls are arranged in a way that seems like a reverse letter "J". The border between Brazil and Argentina runs through the Devil's Throat. On the right bank is the Brazilian territory, which has just over 20% of the jumps of these falls, and the left side jumps are Argentine, which make up almost 80% of the falls. 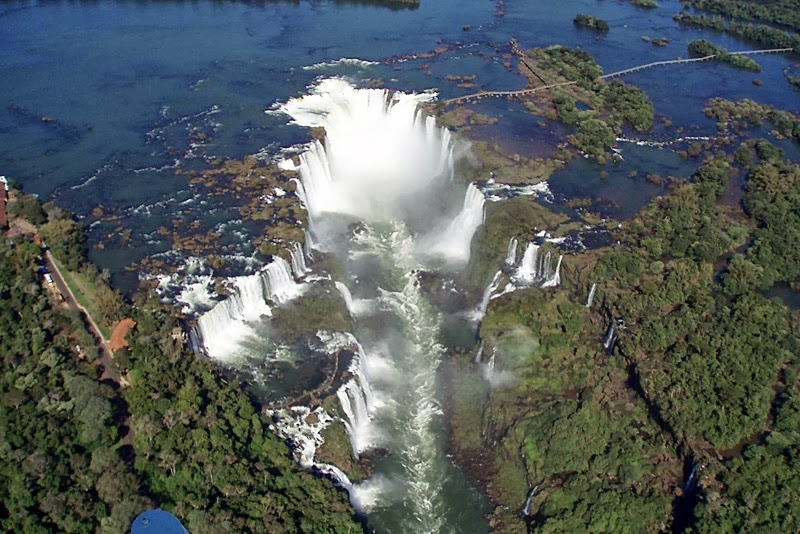 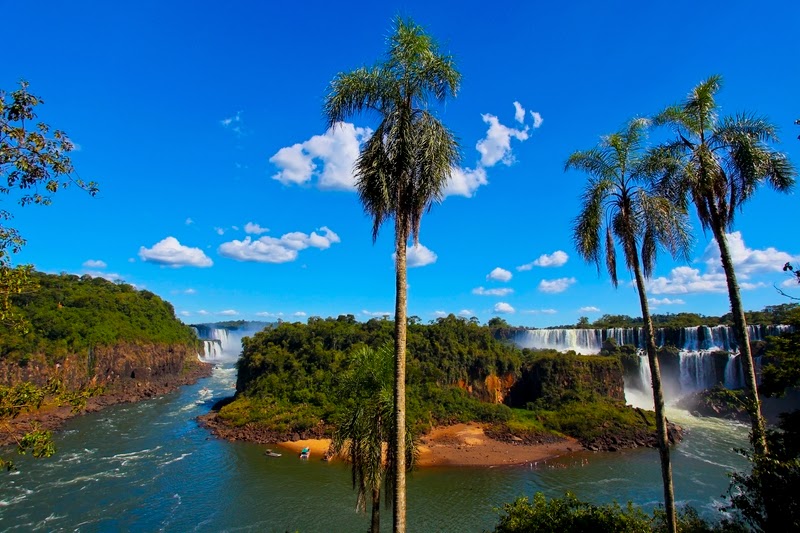 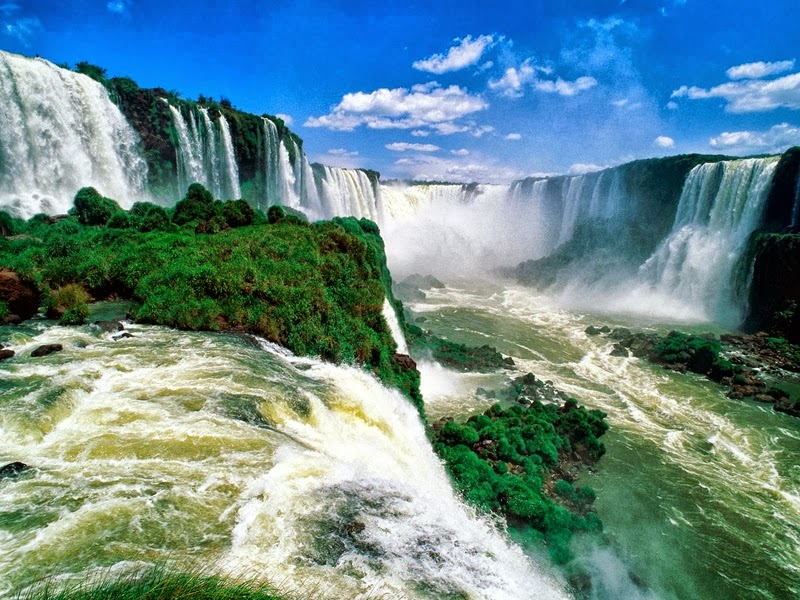