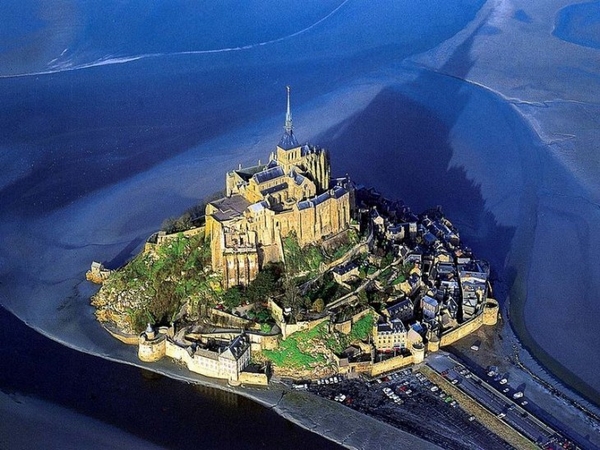 Mont Saint-Michel  is a rocky tidal island 247 acres (100 ha) in size, and is a commune in Normandy, France. It is located approximately one kilometre (just over half a mile) off the country's northwestern coast, at the mouth of the Couesnon River near Avranches. The island's highest point is 92 metres (301 feet) above sea level. The population of the island is 44, as of 2009. The island has held strategic fortifications since ancient times, and since the eighth century AD been the seat of the monastery from which it draws its name. One of France's most recognisable landmarks, Mont Saint-Michel and its bay are part of the UNESCO list of World Heritage Sites and more than 3 million people visit it each year. 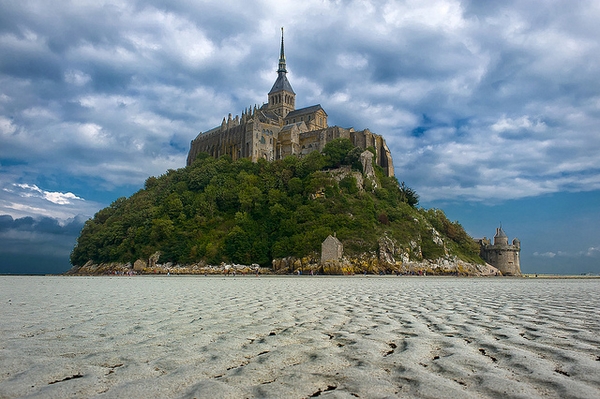 In prehistoric times the bay was land. As sea levels rose, erosion shaped the coastal landscape over thousands of years. Several blocks of granite or granulite emerged in the bay, having resisted the wear and tear of the ocean better than the surrounding rocks. These included Lillemer, the Mont-Dol, Tombelaine (the island just to the north), and Mont Tombe, later called Mont Saint-Michel. 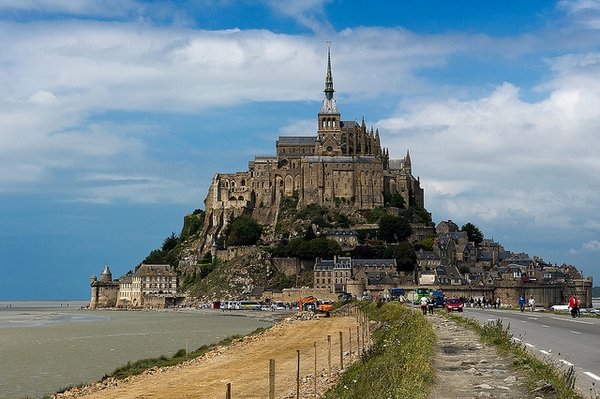 Mont Saint-Michel was previously connected to the mainland via a tidal causeway, i.e., a trackway covered at high tide and revealed at low tide. This connection has been altered over the centuries. The coastal flats have been polderised to create pastureland, thus the distance between the shore and the south coast of Mont Saint-Michel has decreased, and the Couesnon River has been canalised, reducing the dispersion of the flow of water, and thereby encouraging a silting-up of the bay. In 1879, the tidal causeway was converted into a raised or dry causeway. This prevented the tide from scouring the silt around the mount. 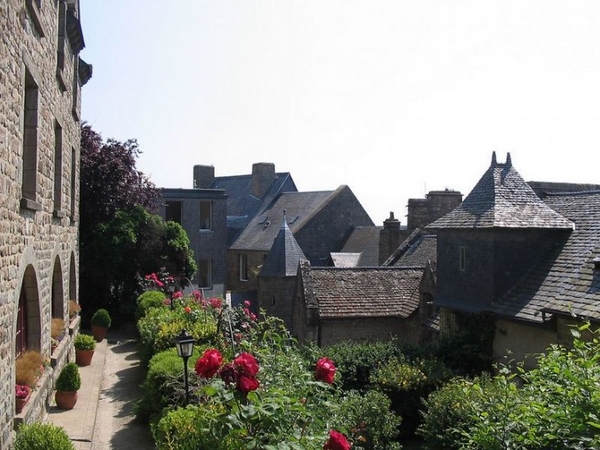 On 16 June 2006, the French prime minister and regional authorities announced a €164 million project (Projet Mont-Saint-Michel) to build a hydraulic dam using the waters of the river Couesnon and of tides to help remove the accumulated silt deposited by the rising tides, and to make Mont Saint-Michel an island again. It was projected to be completed by 2015 . 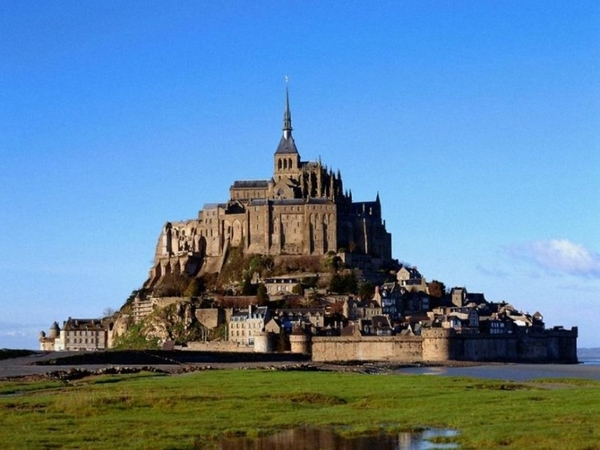 The construction of the dam began in 2009 and is now complete. The project also included the removal of the causeway and its visitor car-park. It will be replaced by a light bridge, allowing the waters to flow freely around the island, which will improve the efficiency of the now operational dam, and a replacement car-park on the mainland. Visitors will use small shuttles to cross the future bridge which will still be open to pedestrians and unmotorised vehicles. 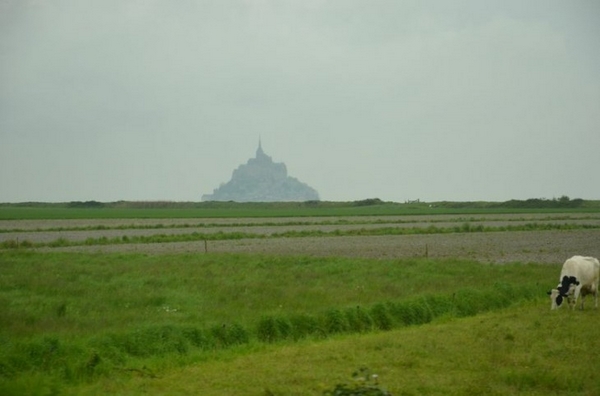 Mont Saint-Michel was used in the sixth and seventh centuries as an Armorican stronghold of Gallo-Roman culture and power until it was ransacked by the Franks, thus ending the trans-channel culture that had stood since the departure of the Romans in AD 460. From roughly the fifth to the eighth century, Mont Saint-Michel belonged to the territory of Neustria, and in the early ninth century was an important place in the marches of Neustria. 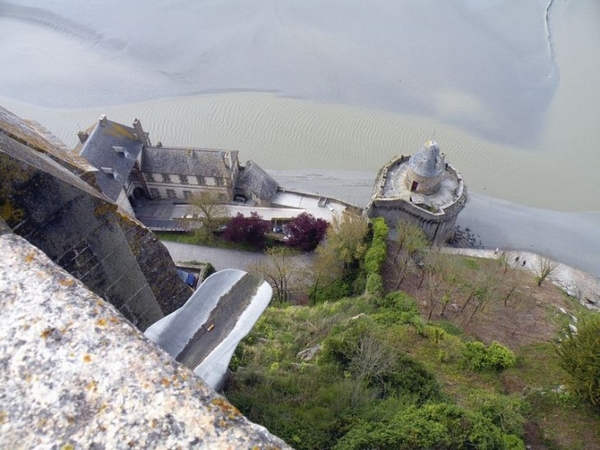 Before the construction of the first monastic establishment in the 8th century, the island was called Mont Tombe (Latin tumba). According to legend, the Archangel Michael appeared in 708 to St. Aubert, the bishop of Avranches, and instructed him to build a church on the rocky islet. Aubert repeatedly ignored the angel's instruction until Michael burned a hole in the bishop's skull with his finger. Unable to defend his kingdom against the assaults of the Vikings, the king of the Franks agreed to grant the Cotentin peninsula and the Avranchin, including Mont-Saint-Michel, to the Bretons in the 867 Treaty of Compiègne. This marked the beginning of the brief period of Breton possession of the Mont. In fact, these lands and Mont Saint-Michel were never really included in the duchy of Brittany and remained independent bishoprics from the newly created Breton archbishopric of Dol. When Rollo confirmed Franco as archbishop of Rouen, these traditional dependences of the Rouen archbishopric were retained in it. 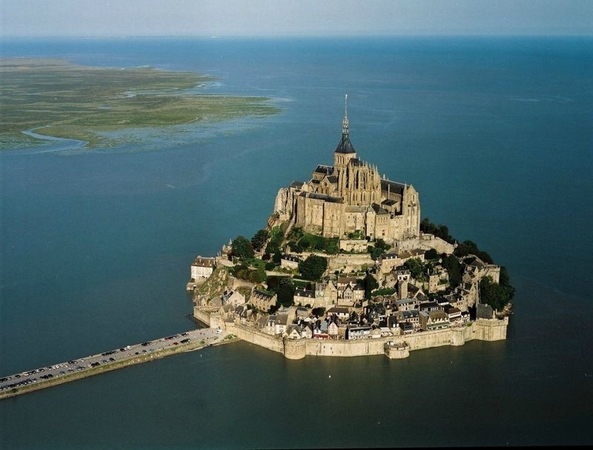 The mount gained strategic significance again in 933 when William "Long Sword" annexed the Cotentin Peninsula from the weakened Dukes of Brittany. This made the mount definitively part of Normandy, and is depicted in the Bayeux Tapestry, which commemorates the 1066 Norman conquest of England. Harold, Earl of Wessex is pictured on the tapestry rescuing two Norman knights from the quicksand in the tidal flats during a battle with Conan II, Duke of Brittany. Norman Ducal patronage financed the spectacular Norman architecture of the abbey in subsequent centuries. In 1067, the monastery of Mont Saint-Michel gave its support to Duke William of Normandy in his claim to the throne of England. This he rewarded with properties and grounds on the English side of the Channel, including a small island off the southwestern coast of Cornwall which was modeled after the Mount and became a Norman priory named St Michael's Mount of Penzance. During the Hundred Years' War, the English made repeated assaults on the island, but were unable to seize it due to the abbey's improved fortifications. Les Michelettes – two wrought-iron bombards left by the English in their failed 1423–24 siege of Mont Saint-Michel – are still displayed near the outer defense wall. 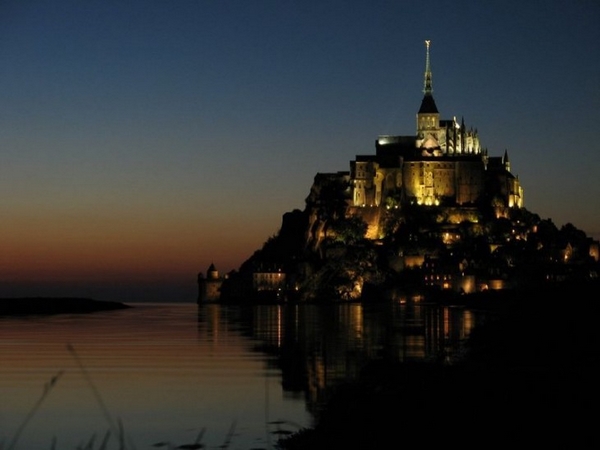 When Louis XI of France founded the Order of Saint Michael in 1469, he intended that the abbey church of Mont Saint-Michel become the chapel for the Order, but because of its great distance from Paris, his intention could never be realized. The wealth and influence of the abbey extended to many daughter foundations, including St Michael's Mount in Cornwall. However, its popularity and prestige as a centre of pilgrimage waned with the Reformation, and by the time of the French Revolution there were scarcely any monks in residence. The abbey was closed and converted into a prison, initially to hold clerical opponents of the republican regime. High-profile political prisoners followed, but by 1836, influential figures – including Victor Hugo – had launched a campaign to restore what was seen as a national architectural treasure. The prison was finally closed in 1863, and the mount was declared an historic monument in 1874. Mont Saint-Michel and its bay were added to the UNESCO list of World Heritage Sites in 1979, and it was listed with criteria such as cultural, historical, and architectural significance, as well as human-created and natural beauty. 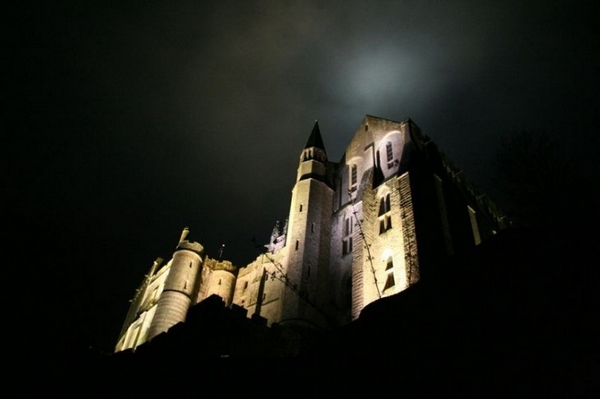