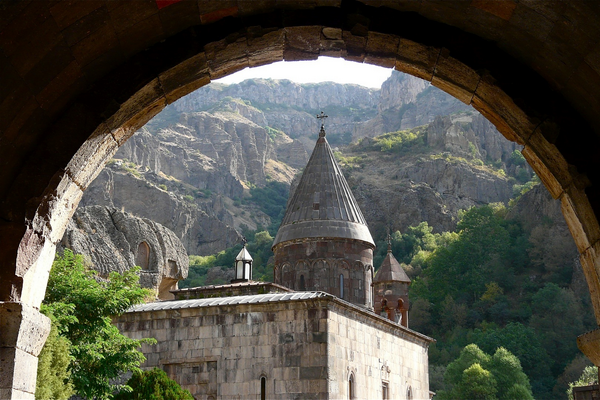 The monastery of Geghard is a unique architectural construction in the Kotayk province of Armenia, being partially carved out of the adjacent mountain, surrounded by cliffs. It is listed as a UNESCO World Heritage Site. While the main chapel was built in 1215, the monastery complex was founded in the 4th century by Gregory the Illuminator at the site of a sacred spring inside a cave. The monastery had thus been originally named Ayrivank, meaning "the Monastery of the Cave". The name commonly used for the monastery today, Geghard, or more fully Geghardavank (Գեղարդավանք), meaning "the Monastery of the Spear", originates from the spear which had wounded Jesus at the Crucifixion, allegedly brought to Armenia by Apostle Jude, called here Thaddeus, and stored amongst many other relics. Now it is displayed in the Echmiadzin treasury. The spectacular towering cliffs surrounding the monastery are part of the Azat river gorge, and are included together with the monastery in the World Heritage Site listing. Some of the churches within the monastery complex are entirely dug out of the cliff rocks, others are little more than caves, while others are elaborate structures, with both architecturally complex walled sections and rooms deep inside the cliff. The combination, together with numerous engraved and free-standing khachkars is a unique sight, being one of the most frequented tourist destinations in Armenia. Most visitors to Geghard also choose to visit the nearby Garni temple, a Parthenon-like structure located further down the Azat river. Visiting both sites in one trip is so common that they are often referred to in unison as Garni-Geghard. 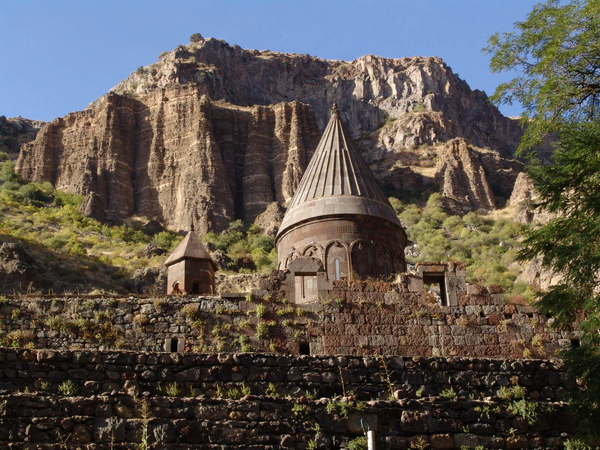 The monastery was founded in the 4th century, according to tradition by Gregory the Illuminator. The site is that of a spring arising in a cave which had been sacred in pre-Christian times, hence one of the names by which it was known, Ayrivank (the Monastery of the Cave). The first monastery was destroyed by Arabs in the 9th century. Nothing has remained of the structures of Ayrivank. According to Armenian historians of the 4th, 8th and 10th centuries the monastery comprised, apart from religious buildings, well-appointed residential and service installations. Ayrivank suffered greatly in 923 from Nasr, a vice-regent of an Arabian caliph in Armenia, who plundered its valuable property, including unique manuscripts, and burned down the magnificent structures of the monastery. Earthquakes also did it no small damage. 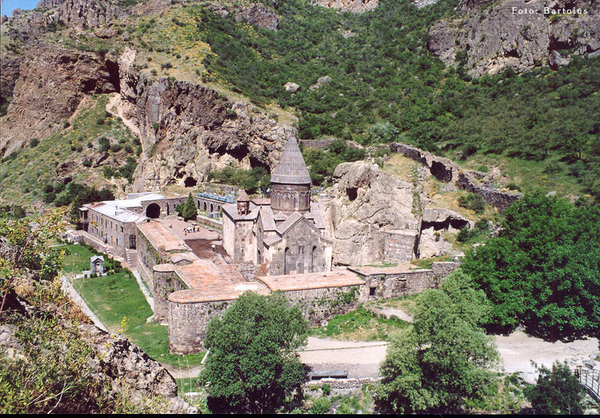 Though there are inscriptions dating to the 1160s, the main church was built in 1215 under the auspices of the brothers Zakare and Ivane, the generals of Queen Tamar of Georgia, who took back most of Armenia from the Turks. The gavit, partly free-standing, partly carved in the cliff, dates to before 1225, and a series of chapels hewn into the rock dates from the mid 13th century following the purchase of the monastery by Prince Prosh Khaghbakian, vassal of the Zakarians and founder of the Proshian principality. Over a short period the Proshyans built the cave structures which brought Geghard well-merited fame — the second cave church, the family sepulcher of zhamatun Papak and Ruzukan, a hall for gatherings and studies (collapsed in the middle of the 20th century) and numerous cells. The chamber reached from the North East of the gavit became Prince Prosh Khaghbakian’s tomb in 1283. The adjacent chamber has carved in the rock the arms of the Proshian family, including an eagle with a lamb in its claws. A stairway W of the gavit leads up to a funerary chamber carved out in 1288 for Papak Proshian and his wife Ruzukan. The Proshyan princes provided Geghard with an irrigation system in the 13th century. At this time it was also known as the Monastery of the Seven Churches and the Monastery of the Forty Altars. All around the monastery are caves and khachkars. The monastery was defunct, the main church used to shelter the flocks of the Karapapakh nomads in winter, until resettled by a few monks from Ejmiatsin after the Russian conquest. Restored for tourist purposes but now with a small ecclesiastical presence, the site is still a major place of pilgrimage. 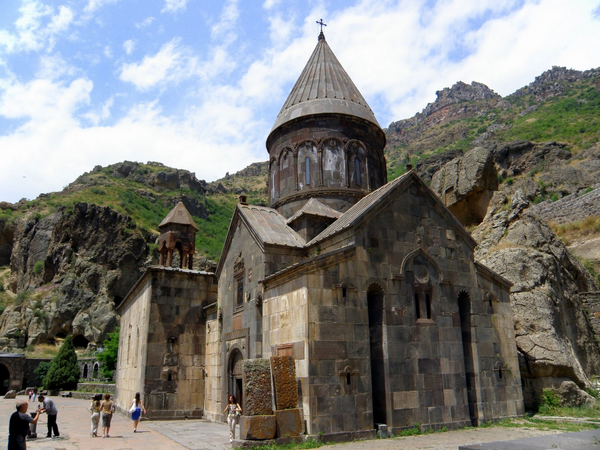 The monastery was famous because of the relics that it housed. The most celebrated of these was the spear which had wounded Christ on the Cross, allegedly brought there by the Apostle Thaddeus, from which comes its present name, Geghard-avank ("the Monastery of the Spear"), first recorded in a document of 1250. This made it a popular place of pilgrimage for Armenian Christians over many centuries. Relics of the Apostles Andrew and John were donated in the 12th century, and pious visitors made numerous grants of land, money, manuscripts, etc., over the succeeding centuries. In one of the cave cells there lived, in the 13th century, Mkhitar Ayrivanetsi, the well-known Armenian historian. 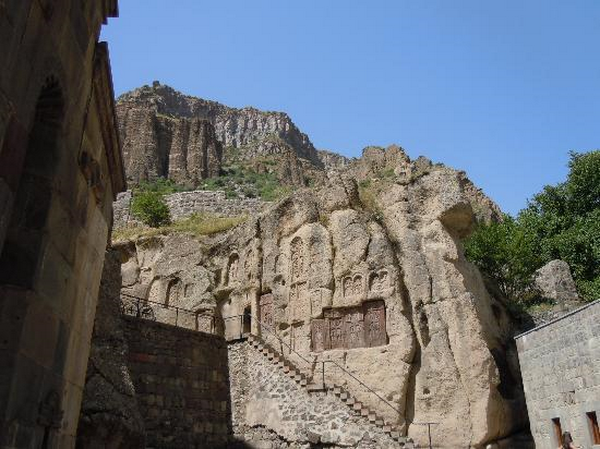 No works of applied art have survived in Geghard, except for the legendary spear (geghard). The shaft has a diamond-shaped plate attached to its end; a Greek cross with flared ends is cut through the plate. A special case was made for it in 1687, now kept in the museum of Echmiadzin monastery. The gilded silver case is an ordinary handicraft article of 17th century Armenia. 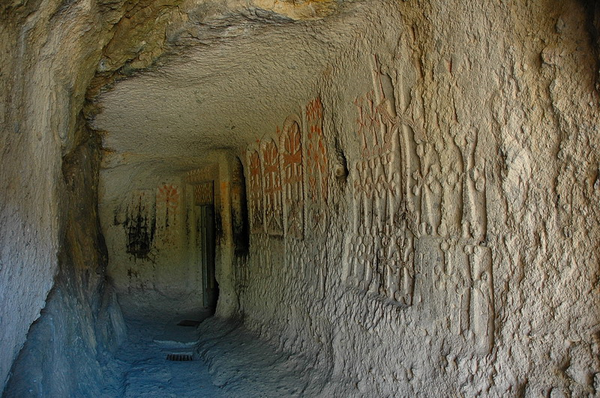 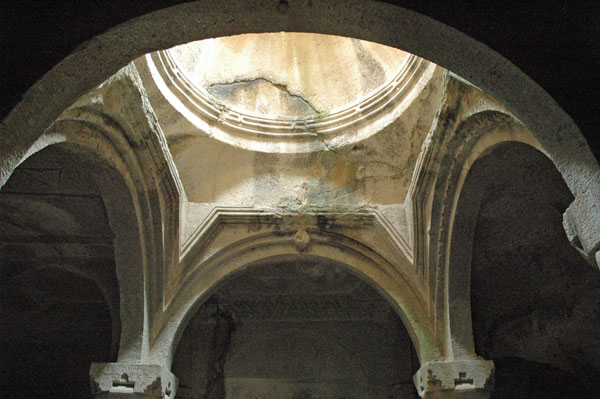